Researchers sounded  an alarm today on ads touting the wonders of testosterone treatments.

Testosterone is billed by some as a virtual fountain of youth — a miracle drug for middle-aged men looking for a boost from the boardroom to the bedroom.

“When I get out of the shower, and look in the mirror, I’m impressed,” Running said. “I really mean that. I mean like looking at myself in the mirror, I look freaking awesome!” 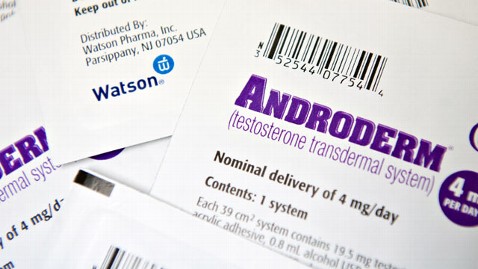 Researchers in Texas, however, said that all those ads may be driving a potentially worrisome amount of overtreatment.

Between 2001 and 2011, they said testosterone prescriptions tripled among men older than 40.

But they said  a full quarter of those men had been put on testosterone without even having had their levels checked first to see whether they needed it.

“It’s become a near-epidemic proportions, what we’re seeing in our clinics,” said Dr. Edmund Sabanegh, the chairman of urology at the Cleveland Clinic.

The New England Journal of Medicine warned that only about 2 percent of men older than 40 should be getting a boost at all.

That’s because while added testosterone can lead to increased muscle mass and sex drive, some doctors said too much raises the risk of prostate cancer and liver damage.

In an interview with ABC News, Greg Miley of AbbVie, the makers of AndroGel, a popular low-T treatment, said: “The prescribing of topical testosterone replacement therapies can only be prescribed by a physician after taking the patient’s complete medical condition into consideration.”

Eli Lilly, the makers of another low-T treatment called Axiron, told ABC News:  ”We encourage patients to talk to their physicians to weigh the benefits and risks before taking any prescription. … Axiron is a prescription medication, approved by the FDA, for men with certain conditions associated with a deficiency or absence of testosterone. Lilly does not condone the use of our medicines for off-label purposes. ”

The red flags raised by researchers, however, don’t seem to be having any effect on the business of low-T.

Walk-in clinics have sprung up across the country. And according to Bloomberg, sales are expected to triple from $1.6 billion in 2011 to $5 billion by 2017.